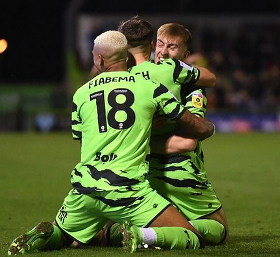 Fiabema's loan spell at Rosenborg was cut short in the days leading up to the close of the summer transfer window, before joining Forest Green Rovers on deadline day for the remainder of the season.

The 19-year-old found it hard to break into the first team of the Norwegian giants, making five starts in the Eliteserien and netted his only league goal in a 5-2 win at Sandefjord.

He has wasted no time finding his feet at Forest Green Rovers, featuring in all their five matches in all competitions since his transfer.

In what was his third consecutive start for the Green Army, Fiabema doubled their advantage in the 79th minute, slamming home at the near post after a neat move by the visitors.

Late on, Evans reduced the deficit when he found the net from close range.

Fiabema, who is eligible to represent the Super Eagles through his father, has totaled 19 appearances combined for three different clubs as a professional.