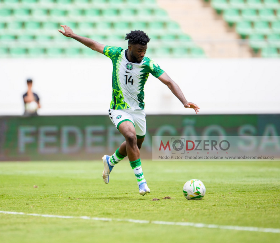 Moffi is the top-scoring Nigerian player in the big five European Leagues - comprised of the English Premier League, Spain's La Liga, German Bundesliga, Italian Serie A and French Ligue 1 - in the 2022-2023 season.

Only Neymar (8) and Kylian Mbappe (7) have scored more goals than Moffi (6) in the French top flight so far this season.

The Nigeria international has averaged a goal every 106 minutes in the new season, netting braces against Clermont Foot and Lens before strikes against Lyon and Auxerre.

Transfermarkt has taken notice of his form for club and country over the last three months, upgrading his market value from nine million euros to the current twelve million euros.

Moffi helped the Super Eagles set a scoring record in June, scoring a brace in a 10-0 hammering of São Tomé and Príncipe in a 2023 Africa Cup of Nations qualifier.

The 23-year-old is the most expensive player in the Lorient squad and ranks number 12 among all players classed as Nigerians.