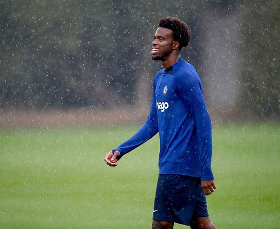 Chelsea legend Pat Nevin has backed Carney Chukwuemeka to make an impact in his first season at the Blues.

Chelsea pulled off a massive transfer coup by luring him to Stamford Bridge in August, outbidding European heavyweights Barcelona and AC Milan to secure the signature of the former Aston Villa wonderkid.

A central midfielder by trade, Chukwuemeka showed he has goals and assists in his locker this summer, scoring three goals and assisting two others to help England win the 2022 European U19 Championship.

And he grabbed the headlines in last weekend's behind-closed-doors friendly between Brighton & Hove and Chelsea, bagging a brace in a 2-1 win over the Seagulls.

The England youth teamer of Nigerian descent has yet to make his first team debut since his move to Chelsea but has been named in four matchday squads.

With games coming thick and fast after the international break, Chukwuemeka could make his debut for Chelsea's first team before the start of the 2022 World Cup.

Writing in his column for Chelsea's official website, Nevin stated : "Even a quick look at who didn’t start against Salzburg shows the impressive options of what is and what will become, available. This isn’t a bad team…

"On top of this, Denis Zakaria and Carney Chukwuemeka are players who could have a notable impact in their first season. Among others, they would still make it a strong bench for this alternative team."

Chukwuemeka made fourteen appearances in the English Premier League, including two starts, during his time at Aston Villa.