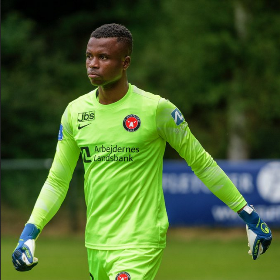 The 18-year-old committed his future to Midtjylland earlier this month, signing a five-year deal until June 30, 2027, and was permanently promoted to the first team.

A professional debut could be on the horizon for Ugboh considering that he has been included in seven matchday squads since the start of the season, including six in European competition.

A world champion with Germany in 2014, Neuer is widely regarded as the best goalkeeper in the world and has enjoyed a trophy-laden career at Bayern Munich, winning ten Bundesliga titles and five DFK Pokals as well as the Champions League, FIFA Club World Cup and UEFA Super Cup.

"My big idol is Manuel Neuer from Bayern Munich because he has so much quality. I like his confidence and leadership and he always plays well in the big games," Ugboh told FCM's official webpage.

"A lot of his saves are really good and that's something I look up to."

Ugboh has a lofty ambition, revealing that he wants to play in the English Premier League in the future.

FC Midtjylland academy graduate Frank Onyeka made the step up from The Wolves to Brentford in the summer of 2021.

"My dream is to play in the Premier League. People see it as the most competitive league in the world and I will fight everything I can to end up there one day," he added.

He is the first African goalkeeper in the history of FC Midtjylland.