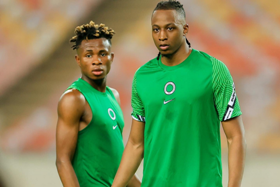 Allnigeriasoccer.com presents a team that could comfortably play the international friendlies against former African champions Algeria and get a decent result.

They are players who were either injured in their clubs' last league games prior to the official release of the team or were not invited altogether for the game.

This XI excludes Nigeria-eligible players who are also under consideration.

The South Africa-based goalkeeper can be said to not be in the top three options as Super Eagles goalkeepers.

The keeper is currently unattached as a club linked with him has denied knowledge of media speculation linking the player to them.

However with the exceptions of Maduka Okoye, Francis Uzoho and Adebayo Adeleye, Akpeyi is the logical choice for consideration if there was a fourth place especially as the Nigerian factor of loyalty comes into play.

Shehu Abdullahi was a contender but we opted to go with Tyrone Ebuehi who has played one Serie A game for Empoli this season at the expense of Abdullahi who just signed for Levski Sofia on a free transfer.

The fight for places at left back is getting more intense as Calvin Bassey who plays for Ajax now contends for the jersey with Porto's Zaidu Sanusi.

Collins left Paderborn in the second tier of the German Bundesliga for Cardiff FC and was in good form before copping an injury.

QPR’s new signing Leon Balogun was originally named in the team to face Algeria but picked up an injury he suffered last weekend that has ruled him out of the game.

When fit and in form, Balogun is one of the first names that are considered for selection in the Super Eagles.

Orlando Pirates defender Olisa Ndah was not called up for this match against the Algerians.

Ndah has proven to be a great talent and may not necessarily be based in Europe to stake a claim in the Eagles fold.

Tough tackling Innocent Bonke will definitely be considered for an alternative Super Eagles side and makes the double pivot role in our team alongside hitherto first team regular Oghenekaro Etebo.

Aris of Greece new signing Oghenekaro Etebo has been a key member of the Super Eagles but of late his appearances for the national team have been limited due to injuries.

Had he not been unfortunate with those setbacks, Etebo should be talking about a starting place next week Tuesday.

Southampton midfielder Joe Aribo has started in four games and came off the bench on three occasions since his move to the Premier League from Scottish giants Rangers.

There's no explanation yet why he was omitted from the roster for the last international break before the 2022 World Cup.

The Villarreal winger was among the 25 players originally in the team but he was eventually dropped due to muscle-related injury.

NPFL defender Ebube Duru was drafted in as replacement for Chukwueze.

Skipper of the side Ahmed Musa was also meant to travel to Constantine with his teammates but copped an injury for his Turkish Super Lig side Sivasspor.

Musa makes this team due to his leadership role as well  as his obvious commitment.

The big man himself is arguably the biggest miss as his injury in the UEFA Champions League against Liverpool effectively ruled him out.

Super Eagles coach Jose Peseiro  may not be overly worried as the Napoli striker will be more useful in the March 2023 Africa Cup of Nations qualifiers.