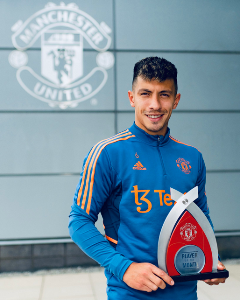 English Premier League giants Manchester United completed the signing of Lisandro Martinez from Ajax Amsterdam in July, with the center back putting pen to paper on a five-year contract with the option of an extra twelve months.

The arrival of the Argentina international has seen Harry Maguire fall down the pecking order of central defenders at Old Trafford, with Erik ten Hag preferring Raphael Varane and Martinez in central defence.

Martinez, a left-sided center back, has started every single game played by the Red Devils in the Premier League this season, six in total, helping them win each of their last four games.

The Red Devils supporters have taken to his all-action, aggressive style of defending, and voted him Player of the Month for August following his standout performances.

Despite being considered too short to play in the Premier League, Martinez has won more aerial duels than he has lost so far this season.

United, through their official Facebook page, asked fans what has impressed them most about Martinez and majority of the respondents were Nigerians.

As published by Manchester United's official website, below is what the club's Nigerian fans said about United's number 6 :

Alexander Olatunde Giwa: "His confidence on the ball, defensive skills, passing accuracy, tenacity, fighting spirit, passion for the club and everything else. The guy is a butcher and his pairing with Varane in that centre-back position is just so perfect."

Ime-obong Okure: "His aggressiveness, his devotion, his everything... I just love everything about that lad. He's an absolute beast."

Oreoluwa Phydelia Dharmie: "He really holds his position down, he's fearless and he's very confident on the ball. He's a real butcher."

Huzaifa Sani Bello: "I love everything about Martinez and especially his composure and fighting spirit. Martinez x Varane is a fantastic duo that we have right now."