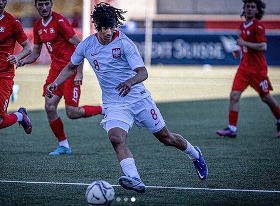 Oyedele won't be eligible to represent the Nigerian and English national teams without requesting a change of association after playing his first competitive game for Poland's youth teams.

The 17-year-old became cap-tied to Poland when he entered the fray in the 73rd minute of Poland's 2-0 win over Bosnia-Herzegovina in a European U19 Championship qualifier staged at Stadion Miejski (Gdynia) on Wednesday evening.

Prior to Oyedele's debut for Poland U19s, he had appeared in a non-binding game for Poland at U18 level.

The verstaile midfielder was born in Manchester, England and qualifies to represent Nigeria and Poland through his father and mother respectively.

Oyedele still plays for Manchester United U18s team but he's expected to be promoted to the development squad on a permanent basis ahead of the start of next season.