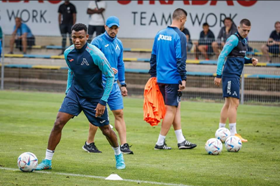 The 2016 Olympic Games bronze medalist has put pen to paper on a contract until the end of the 2022-2023 season and there is a clause in his contract for its extension after the expiration of the term.

According to Sportal.bg, Shehu will receive 9,000 euros (approximately N3.8 million in Nigerian currency) at Levski Sofia every month, and none of the other players at the club are earning a similar amount at the moment.

Logically, the Nigerian was able to negotiate a higher salary than his teammates because he joined Levski Sofia as a free agent, coupled with the fact that he is a seasoned international with appearances at the World Cup, Africa Cup of Nations and Olympic Games.

Shehu offers versatility as he is capable of playing as a right-back, defensive midfielder and central defender.

The 29-year-old was deployed a central defender on his unofficial debut for Levski Sofia, playing for 45 minutes in a 4-0 win over FC Slivnishki Geroy last weekend and is in contention to participate in another friendly against Slavia on Saturday.