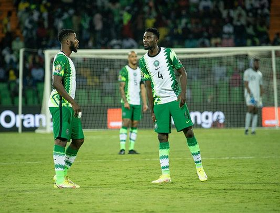 Leicester City midfielder Wilfred Ndidi is no longer in contention to play his first game under Nigeria manager Jose Peseiro.

The Nigeria Football Federation brought bad news from Algeria this morning, stating that Ndidi is injured and out of the game against Algeria.

Ndidi has left the Nigeria camp and returned to England for a proper medical check-up ahead of Leicester City's first game after the international break against Nottingham Forest.

If he does not recover before the clash against Forest, his absence would be a big blow to manager Brendan Rodgers who is under intense scrutiny following the club's underwhelming start to the 2022-2023 season.

You have to go back to January 23,2022 for the last time Ndidi played for the Super Eagles when he went the distance in a 1-0 loss to Tunisia at the 2021 Africa Cup of Nations.

The former Racing Genk star missed the back-to-back World Cup playoff with Ghana due to a knee issue and was not in the squad for the summer matches against Mexico, Ecuador, Sierra Leone and São Tomé and Príncipe.