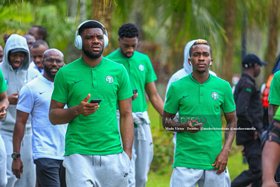 Speculation in the media that the Super Eagles glovesman is on the brink of signing a contract with The Beautiful Birds is way wide of the mark.

Allnigeriasoccer.com can report with certainty that Akpeyi has not discussed a contract with the leadership of Moroka Swallows.

The former Kaizer Chiefs goalkeeper surfaced at Moroka Swallows this week because he wanted to maintain his fitness with a professional team instead of training alone.

Akpeyi spoke with Moroka Swallows Chairman David Mogashoa, who accepted his proposal to train with the club.

Having said that, the experienced goalkeeper has made it clear that he would be open to joining the Johannesburg-based club if he is offered a contract.

Akpeyi is on the lookout for a new employer after parting company with Kaizer Chiefs in the off season following the expiration of his contract.

The 36-year-old saw a proposed move to Sekhukhune United FC fall through this month, with the club yet to get back to him after holding contract talks.