...the complete Nigerian football portal
Subscribe
Italian-born Tottenham-owned fullback on the radar of Nigeria after snub by Mancini
Published: September 22, 2022 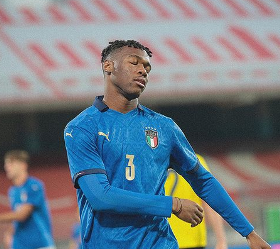 Tottenham Hotspur-owned fullback Destiny Udogie is reportedly on the radar of the Nigeria Football Federation, with a view to convincing him to play for the Super Eagles.

Had he been invited to the Azzurri and figured in any of the two matches, he would have become cap-tied to his country of birth.

According to various reports in the Italian media including Mondo Udinese, Nigeria failed in their first attempt to lure Udogie to the Super Eagles and it is not certain that they will not try to the end.

Given his age, nineteen, Udogie would be representing the Super Eagles for the next fifteen years, injury permitting, if he made up his mind to play for the three-time African champions.

Udogie has been provisionally cap tied to Italy since March 2019 when he played his first competitive game for their U17 team in a European Championship qualifier against Romania.

He has had a fine start to the 2022-2023 season  with two assists in six appearances for surprise package Udinese, who are third in the table after seven rounds.

Udogie played the entirety of the second half as Italy U21s were beaten 2-0 by England in a friendly on Thursday.