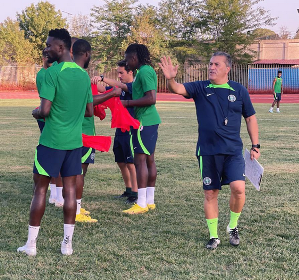 Nigeria manager Jose Peseiro has explained that Wilfred Ndidi was forced to leave the international training camp in
Constantine, Algeria after suffering a relapse of an injury he sustained during the Premier League meeting between Tottenham Hotspur and Leicester City last weekend.

The Super Eagles midfielder was substituted with five minutes remaining in the defeat to Antonio Conte's team and it has come to light that he was playing through the pain barrier before making way for Boubakary Soumaré.

Sensational reports claimed that Ndidi was at daggers drawn with Peseiro because he was asked to play in central defence rather than his preferred holding midfield role for the friendly against Algeria.

In an interview with the Super Eagles Media Officer, Babafemi Raji, the Portuguese football tactician set the record straight, stating that Ndidi left the camp early in order not to aggravate the injury.

"When Ndidi came, he did training without intensity, a small training but with conditions, but he felt something in his hamstring.

"After yesterday's session, I thought it was better not to use him. I don't want to use a player in a friendly match only to see him sustain more injury.

"It is for that reason he went back to Leicester today, for him to recover faster there."

Ndidi's injury-enforced absence could open the door for Club Brugge newbie Raphael Onyedika to make his debut for the Super Eagles.

The 25-year-old Ndidi has missed the last six matches played by the Super Eagles due to fitness issues.