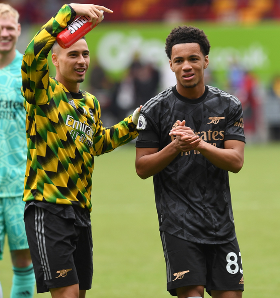 England and Arsenal legend David Seaman believes that  Ethan Nwaneri needs to be protected amid the rave reviews that greeted his remarkable feat as the youngest debutant in the English Premier League.

The attacking midfielder, whose father is Nigerian and thus eligible to play for the Nigerian national teams, made history in the Gunners' 3-0 win over Brentford at the Gtech Community Stadium just before the international break when he came on in the second half at the age of 15 and 181 days old.

There have been supports as well as criticisms for manager Mikel Arteta's decision to feature the lad.

Former England international David Seaman spoke to talkSPORT to express his thoughts on the feat.

"It’s great for us to be making history, but you have to think of the long term. If you are good enough, you are old enough," Seaman stressed.

"He’s got to be handled right off the pitch. He’s a really good player, but you have to look after him.

"It all depends on how good you are and that’s what determines whether you get a chance to play or not.

"I've seen this guy in training when I’ve been going in and coaching with the Under-23s and Under-18s. Honestly, you wouldn’t believe his age."

On whether Nwaneri is the most gifted he has seen at that age, Seaman responded in glowing terms and reckons that the Anglo-Nigerian wonderkid can follow in the footsteps of Manchester United legend Ryan Giggs if handled rightly.

"He is at that age. He looks like he’s a fully experienced pro. Then you find out how old he is… 15.

"He’s that good, but still has to be handled right.

"Very similar to Ryan Giggs, he was handled perfectly by Fergie and look how good he turned out to be.

"It’s about making sure he gets the right treatment off the field. He will certainly get it at the training ground and in games, he will be well looked after.

"He’s that good that he can handle all that."

Nwaneri could get more Arsenal chances in the Carabao Cup and FA Cup competitions.