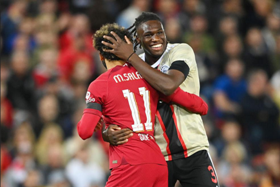 Ajax Amsterdam insider Freek Jansen has underlined that Calvin Bassey is still learning the ropes as a central defender.

The Nigeria international, a summer signing from Scottish Premiership giants Rangers, struggled in his last two matches before reporting for international duty - against Liverpool in the Champions League and AZ in the Dutch Eredivisie.

Bassey is predominantly a left-back but Rangers manager Giovanni van Brockhorst moved him to the centre-back position following an injury sustained by Leon Balogun.

The Leicester City academy product was blamed for Liverpool's winning goal at Anfield, failing to stop Joel Matip from heading home from a corner kick in the closing minutes.

"He was still playing left back at Rangers around this time last year," Jansen was quoted as saying by AjaxShowtime, via Pak Schaal podcast.

"Then Van Brockhorst put him in the center of the left. He can absolutely do that. We have seen that often enough, for example at Rangers home. I really thought he was so very good in that place."

He added : "Only he now also experiences that he is being put under pressure against Liverpool and AZ. Opponents often choose the least central defender to put pressure on.

"Then of course they choose Bassey, because Timber is so comfortable with the ball. is a bit like driving a car for Bassey, you just have to do it very often and then it becomes his own."

Signed as a replacement for Lisandro Martinez, the Nigerian has been mostly used as a central defender since landing at the four-time European champions.

Bassey is currently on international duty with the Super Eagles in Constantine ahead of their upcoming friendlies against Algeria.