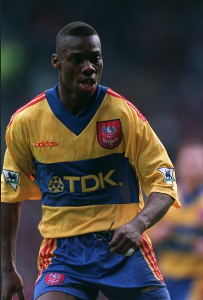 Football365 has compiled a list of every club's youngest player to debut in the English Premier League, with two players of Nigerian descent making the cut.

The list was inspired by none other than Ethan Nwaneri, who a week ago became the youngest player in Premier League and Arsenal history to feature in the Premier League, aged 15 years and 181 days.

A product of Arsenal's Hale End Academy, the Anglo-Nigerian attacking midfielder broke the Premier League record previously held by Harvey Elliot who was 16 years and 30 days old when he played for Fulham in May 2019.

Football365 highlighted that not everyone is impressed that Nwaneri made his senior debut against Brentford on Sunday, September 18.

Aged 17 years, 11 months and 5 days,  George Ndah remains the youngest player to feature for Crystal Palace in the Premier League.

The striker made the first of his 28 Premier League appearances in a 5-0 loss to Liverpool on November 28, 1992, coming off the bench to replace Lee Sinnott with seventeen minutes left on the clock.

The Camberwell native was called up to the Super Eagles in 1999 but an injury prevented him from linking up with the squad.

After leaving Crystal Palace in 1997, Ndah turned out for Swindon Town and Wolverhampton Wanderers.