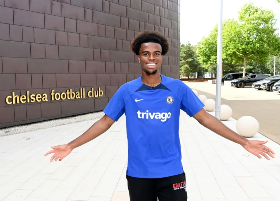 Super Eagles-eligible midfielder Carney Chukwuemeka is reportedly one of the standout players in Chelsea training, according to Chelsea insider Simon Phillips.

Last month, The Blues completed the signing of one of the most talented youngsters in English football, beating the likes of Barcelona and AC Milan to his signature.

Chukwuemeka made a splash at the 2022 European U19 Championship, registering three goals and two assists to help the Young lions win the tournament.

Since landing at Chelsea from Aston Villa, the Anglo-Nigerian wonderkid has yet to make his senior debut and has been building up his match fitness by playing for the development squad ahead of an inevitable first-team debut.

The 18-year-old was a non-playing substitute in Premier League matches against Leeds United and Southampton, and was on the bench in the Champions League games with Dinamo Zagreb and Red Bull Salzburg.

In a behind closed doors friendly between Brighton & Hove and Chelsea before the international break, Chukwuemeka further enhanced his reputation by scoring twice for the Londoners in a 2-1 win.

Phillips told Givemesport : " He’s been one of the names I’ve been given when I’ve asked who’s impressing Potter in training at the moment.

“Chukwuemeka has been given to me every time I’ve asked, so he’s obviously standing out in training. He scored those two goals in the game against Brighton, and he actually only came on at half-time, so he scored them in one half."

Chukwuemeka is currently on international duty with England U20s and captained the 2017 world champions as they thrashed Chile 3-0 on September 21 and also started in Saturday's 2-1 win over Morocco.