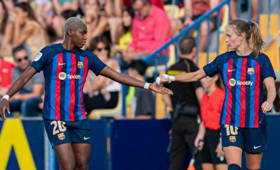 Oshoala ended last season as the top scorer in the Spanish Women's top flight with 20 goals in nineteen appearances despite suffering an injury-plagued campaign.

In what was her second game of the new season, the five-time African Women's Footballer of the Year got on the score sheet two minutes into the second half to double the Blaugrana's advantage.

Oshoala took advantage of a brilliant pass from Mariona Caldentey and slotted past the advancing Elena de Toro in goal for Villarreal.

After Rocío García pulled one back for the home team, Barcelona then increased the lead through Clàudia Pina's 75th minute strike and Lara Mata's own goal after a corner kick by María.

Oshoala has been named in the latest Nigeria squad ahead of a pre-World Cup friendly against Japan in October.

The 27-year-old was forced to withdraw from the Women AFCON in the summer after suffering a Grade 2 Medial Collateral Ligament strain in the Super Falcon's opening day loss to South Africa.