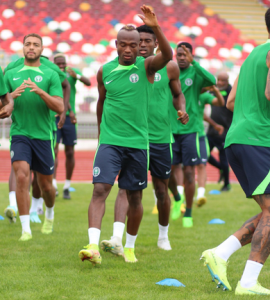 The Super Eagles held their penultimate training session on Sunday before their trip to the Algerian coastal city Oran, where they will do battle with the Fennec Foxes on Tuesday evening in an international friendly.

Alllnigeriasoccer.com has been told that the Super Eagles players and officials will fly out to Oran as from 0900 hours on Monday morning.

The Super Eagles have been based in Constantine since the start of the international break and trained for the last time in the city this evening.

At the end of today's workout, team officials informed that manager Jose Peserio has no fresh injury worries heading into the game against the Dessert Warriors, meaning twenty two players are expected to be named in the matchday squad.

The Portuguese football tactician will not be able to call upon the services of two English-based players in the shape of William Troost-Ekong (Watford) and Wilfred Ndidi (Leicester City) for tomorrow's encounter, with both withdrawing from the squad due to injury.

Nigeria are seeking their first win in four attempts against Algeria, having lost three consecutive matches.