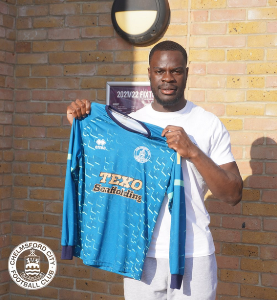 Arsenal-owned goalkeeper Ovie Ejeheri is catching the eye at Chelmsford City FC, putting in solid performances for the non-leaguers week in and week out.

The English-born youngster of Nigerian descent joined Chelmsford City on a short term loan deal until January 2023 in search of first team football.

Had he remained at Arsenal, he would have continued playing for Arsenal's development squad while training with the senior team if required.

Ejeheri has established himself as the number one goalkeeper at the Clarets, having started six games from a possible nine in the National League South.

The Hale End Academy product has not conceded a goal in each of his last two matches - against Oxford City (September 12) and Taunton Town (September 24) - and was also unbeaten against Slough Town and Chippenham Town.

Only St Albans City's Kyran Wiltshire and Weymouth's Tom Blair have been able to beat Ejeheri in the National League South.

With the Arsenal loanee delivering four clean sheets, Chelmsford City are fourth in the table with eighteen points from nine games.

Ejeheri has been on the books of Arsenal since the age of five.