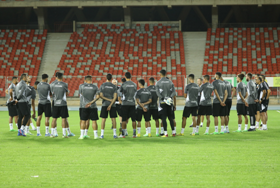 Former Esperance star Abdelkader Bedrane will not add to his international caps for Algeria when they face the Super Eagles in a friendly on Tuesday, September 27.

Through a press release published on their official website, the Algerian Football Federation (AFF) confirmed on Monday morning that the Fennec Foxes continued their preparations for the friendly against Nigeria without Bedrane.

The Damac central defender has been diagnosed with a sprained knee, contracted Friday evening during the friendly against Guinea and has left the team's training camp in Oran.

A starter against the National Elephants, Bedrane lasted less than six minutes on the pitch before making way for Aïssa Mandi due to the ailment.

Nigeria have their injury problems ahead of tomorrow's fixture, with Leicester City midfielder Wilfred Ndidi and Watford central defender William Troost-Ekong back to their base in England due to fitness issues.

According to the program for today, the Algeria national team will have a team walk at 1145 hours, video session at 1200 hours, train in the gym as from 1700 hours and will hold their final training session at 1800 hours while treatment is scheduled to start 2130 hours.

Tomorrow evening's clash at the Stade Olympique d'Oran could be Nigeria's last friendly against African opposition before the resumption of the Africa Cup of Nations qualifiers in March 2023.