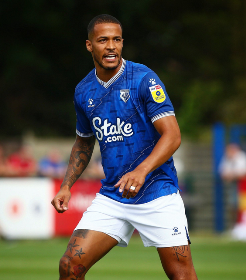 Championship club Watford confirmed via their official website on Monday that they have relieved Rob Edwards of his duties as Head Coach.

The Hornets appointed Edwards as coach in May 2022 and he took over from Roy Hodgson following the conclusion of the 2021-2022 season, where they were relegated from the English Premier League.

Watford are aiming to make an immediate return to the top flight but are outside the promotion places after ten matches in the division.

The Super Eagles players at Watford namely William Troost-Ekong, Samuel Kalu and Maduka Okoye are set to get a new coach.

Former Nigeria U20 international Tom Dele-Bashiru and exciting winger Joseph Hungbo also play for Watford's first team but the central midfielder has been ruled out of action for the foreseeable future after suffering an unfortunate knee injury in training last month.

Troost-Ekong made three appearances in all competitions with Edwards in the dugout, Hungbo was involved in four games, Okoye played just once in the Carabao Cup, while Kalu and Dele-Bashiru have yet to make their season debuts.

Edwards previously managed Wolverhampton Wanderers on an interim basis, AFC Telford United and Forest Green Rovers on a full-time before he was appointed Watford coach.

Update : Slaven Bilić has been appointed as Watford's new Head Coach on an 18-month contract, subject to receiving the relevant work permit.