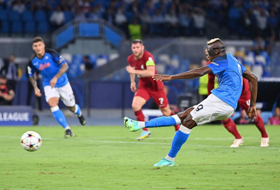 Italian Serie A table toppers Napoli have provided an update on Victor Osimhen ahead of their league game against Ola Aina's Torino at Stadio Diego Armando Maradona on October 1, 2022.

Osimhen was not named in the Nigeria squad for their double header against Algeria after suffering a muscle strain in his right thigh during the UEFA Champions League clash against Liverpool on September 7.

Prior to the international break, the 23-year-old was not involved in the last three matches played by the Blues as a result of the ailment.

Napoli resumed preparations for the upcoming game against Torino on Monday at the SSCN Konami Training Center, with Osimhen in attendance but he did not train fully with his teammates.

The Parthenopeans informed via their official website that their number 9 did therapies and personalized training on the pitch.

Osimhen is rated as doubtful to take to the pitch against Torino and he could also miss trip to Amsterdam for the Champions League game with Ajax.

Without their star striker, Napoli have won their last three games in all competitions, scoring six goals while conceding one.