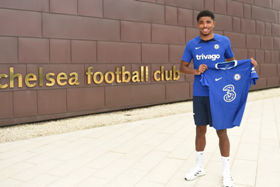 The Ivorian Football Federation are trying to persuade Chelsea star Wesley Fofana to pledge his international future to the two-time African champions, according to French sports daily L'Equipe.

Fofana was born in Marseille to a French mother and an Ivorian father, making him eligible to represent Les Bleus and The Elephants.

The central defender became provisionally cap-tied to his country of birth when he started a European U21 Championship qualifier against Liechtenstein in October 2020 and has earned six caps for the age group.

Fofana's family are reportedly keen on the idea of Fofana switching his international allegiance from France to Ivory Coast ahead of the 2023 Africa Cup of Nations.

However, the 21-year-old wants to represent France and believes he has a chance of being selected for the upcoming World Cup finals.

In the days leading up to the close of the summer transfer window, Fofana joined Chelsea from Premier League rivals Leicester City on a six-year contract and has made two appearances for the Londoners.