...the complete Nigerian football portal
Subscribe
‘Has already shown his patience has a limit’ - Pundit urges England not to lose Chelsea wonderkid to Nigeria
Published: September 27, 2022 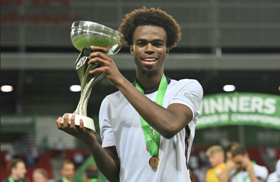 In an article for Football365,  Matthew Stead has warned the English Football Association to be careful not to lose Chelsea wonderkid Carney Chukwuemeka to the Nigeria Football Federation.

Stead named ten players England must be wary over, including 2022 European U19 champion with the Young Lions, Chukwuemeka.

Born in Austria, the central midfielder is also eligible to represent the senior national teams of England, where he grew up, as well as Nigeria through his father, but the Football Association appear to be in the driving seat for his services as he is provisionally cap-tied to them.

In a deal that could be worth up to 20 million pounds, Chukwuemeka signed a six-year contract with Chelsea last month, ending a six-year association with Aston Villa in the process.

The 18-year-old moved onto pastures new because he lost his patience with Aston Villa, with game time coming sparingly.

Stead said on Chukwuemeka : "The teenager is on the pathway to England honours but that is a treacherous route that many fail to complete.

“Nigeria have tempted Alex Iwobi and Ademola Lookman in similar circumstances before and the Austria-born Chukwuemeka has already shown once that his patience has a limit.”

Chukwuemeka enhanced his reputation before the international break by scoring twice for Chelsea in a behind closed doors friendly against Brighton & Hove.

He captained England U20s to a 3-0 victory over Chile in an international friendly on September 21.