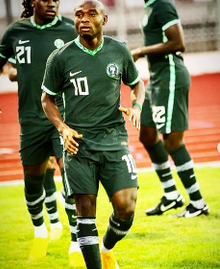 Saviour came off the bench when the Super Eagles played a 2-2 draw with the B team of Algeria last Friday.

The former Nigeria youth international went on to make his first official appearance for the senior national team in the 2-1 loss to Algeria on Tuesday night.

He was brought on in the 68th minute as a replacement for Ademola Lookman but couldn't inspire the Eagles to a win nor a draw.

Peseiro while speaking with NFF TV praised Godwin for his display in the two encounters.

"As regards Godwin, the first time he played in the national team he did well".

The 62-year-old went on to talk about the invitation of new players to the team for the double header friendly, saying he's happy with the job done during the September camping.

"I put about nine different players, some players I didn't know in the past. For this camp we changed a lot of players, only 12 players were involved in the last camping.

"I'm happy with them. Everybody played and I'm happy for the job done."

The next assignment for Jose Peseiro is the International friendly encounter against his country of birth, Portugal on the 17th of November, 2022.