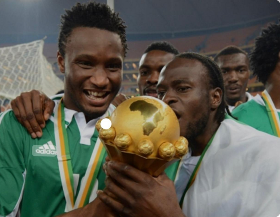 Victor Moses has labelled his former teammate for club and country, John Obi Mikel a 'legend' as he paid tribute to the versatile midfielder following the announcement of his retirement.

Mikel officially called it a day as a professional footballer on Tuesday, September 27 after an illustrious career spanning close to two decades.

Moses was teammates with Mikel at Chelsea for roughly four years and they played together for the Nigeria national team for six years.

As Chelsea players, they were in the team coached by Rafael Benítez that won the 2012-2013 Europa League in what was Moses's first season at Stamford Bridge.

The season before, Mikel was an influential member of the Chelsea side that won the club's first Champions League title, starring as they beat Bayern Munich on penalties in the showpiece.

He cemented his status as a legend of Nigerian football by playing a key role as the Super Eagles won the 2013 Africa Cup of Nations.

Writing on Instagram, Moses said : “ Happy retirement to this legend. Great memories brother. Enjoy whatever is next”.

Mikel also played in England for Middlesbrough and Stoke City in the Championship, and also had spells with Tianjin Teda (China), Trabzonspor (Turkey) and Kuwait SC.