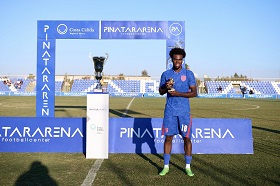 Chelsea wonderkid of Nigerian descent Carney Chukwuemeka added another award to his collection this week after starring for the England U20 squad in the last international break before the 2022 World Cup.

The 18-year-old was named Player of the Tournament at the Costa Càlida Supercup which took place in Spain from 19 to 27 September 2022.

Chuwkuemeka was one of the six Nigeria-eligible youngsters picked in the England U20 squad, the others being goalkeeper Tobi Oluwayemi, defender Daniel Oyegoke, midfielder Tim Iroegbunam, wingers Samuel Edozie and Malcolm Ebiowei.

He captained England to 3-0 victory over Chile on September 21, and also played for ninety minutes in a 2-1 win over Morocco, before playing the last thirty minutes of a 3-0 rout of Australia on Tuesday.

England played against three different Confederations as they used the tournament as part of their preparations for next summer's FIFA U20 World Cup in Indonesia.

Chukwuemeka, Aston Villa's Academy Player of the Season for 2020-21, helped England qualify for the 2023 U20 World Cup, registering three goals and two assists as the Young Lions won the 2022 European U19 Championship.

The Austrian-born central midfielder represented England at U17 and U18 level before earning his first call-up to the U20 squad this month.