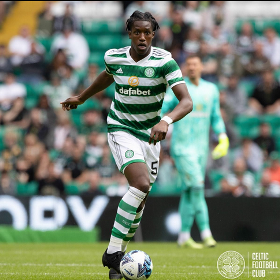 According to The Scottish Sun, Lawal trained with the first team today at Lennoxtown following the conclusion of the international break.

The Hoops have an injury crisis heading into Saturday's Scottish Premiership clash against Motherwell, with uncertainty surrounding the availability of Giorgos Giakoumakis, Cameron Carter-Vickers, Carl Starfelt and Sead Haksabanovic.

Concerned by the potential absence of Carter-Vickers and Starfelt, coach Postecoglou is considering his alternatives in the center of defence and invited Lawal to train with the first team with a view to making a decision whether to include the Irish-Nigerian in the matchday squad.

Having said that, training with the first team of Celtic is nothing new to Lawal as he got an opportunity to train with the senior squad during pre-season preparations.

Although Lawal is a defensive-minded player, he has proved this season that he can score goals with five in ten appearances combined in the Lowland League and Challenge Cup.

One of his rivals for a spot in the matchday squad against Motherwell is German-born Nigerian central defender Moritz Jenz.