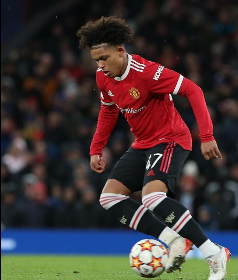 England U19 international of Nigerian descent Shola Shoretire has taken to social media to share his thoughts after he was invited to train with Manchester United first team.

Shoretire was among the promising academy players promoted to first team team training by manager Erik ten Hag this week ahead of the Manchester derby against Premier League champions Manchester City at the Etihad Stadium.

The early team news from the Manchester United camp is that strikers Marcus Rashford and Anthony Martial, and attacking midfielder Donny van de Beek are battling to overcome injuries, so the chances of Shoretire being considered for the matchday squad cannot be entirely written off.

Shoretire has totaled five appearances for Manchester United since his senior debut against Newcastle United on February 21, 2021.

The 18-year-old has yet to make his season debut for the first team under new coach Ten Hag.