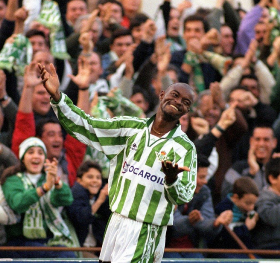 Former Super Eagles, Ajax Amsterdam and Ipswich Town elegant winger Finidi George has revealed why he did not wear the famous white jerseys of Real Madrid despite the interest shown by the European champions during his playing days.

The current head coach of two-time African club champions Enyimba Football Club of Aba in an interview with Supersport La Liga Show , monitored by allnigeriasoccer.com, explained why the deal to play for the Los Blancos did not come to fruition.

Finidi was a winner of the UEFA Champions League in the 1994/1995 season with compatriot Nwankwo Kanu also in the conquering Dutch side.

"After our Champions League final defeat to Juventus (in 2005/2006), the coach made it clear that they wanted to sell me and if even I stayed back at Ajax, that I was not going to play.

"At that time, Real Madrid were interested in signing me but as at that time, they didn't have the kind of money that they have now," George told La Liga Show with a rueful smile.

"Real Betis then came with a good offer and I had to go. My stay there was memorable.

"At Real Betis, I scored in the final of the Copa del Rey the following season against Barcelona. Real Betis were defeated 2-3 by Barcelona after extra time.

"It was a big game. Real Betis did everything we could but it was not possible (to win). Barcelona had the edge, they had the experience.

On whether the goal in the final was the best in his career, Finodi George said there were others better than it.

"It was one of the biggest games and goal I scored but I won't say in my entire career but during my time in Spain," George stressed.

Finidi was part of the Super Eagles squad that won the 1994 Africa Cup of Nations in Tunisia, and previously the bronze winning Eagles side in 1992.

He was in Jo Bonfrere's team that were runners up in 2000 and finished as semifinalists in Mali 2002.