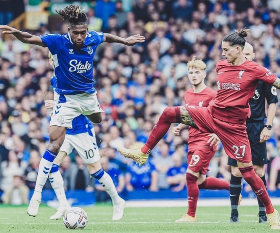 Everton and Super Eagles midfielder Alex Iwobi has missed out on the Premier League Player of the Month award for September 2022.

The official website of the Premier League confirmed on the eve of Nigeria's Independence anniversary that Manchester United striker Marcus Rashford has been voted Player of the Month for September.

Rashford was named September's Premier League Player of the Month after his standout performances helped the Red Devils claim maximum points in their two matches.

The Manchester United number 10 was involved in all the four goals scored by Erik ten Hag's team this month, having bagged an assist in  a hard-fought 1-0 win at Leicester City before registering a brace and an assist in a 3-1 victory over Arsenal.

Iwobi appeared in two matches in the Premier League in September, helping Frank Lampard's team post two clean sheets against Liverpool and West Ham United, and provided the assist for the game-winning goal against the Hammers.

Assuming he won the Premier League POTM for September, he would have followed in the footsteps of Austin Okocha, Osaze Odemwingie, Odion Ighalo and Kelechi Iheanacho who have all won the award in the past.