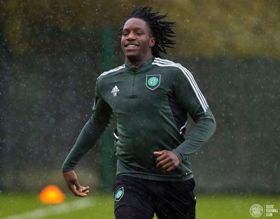 Republic of Ireland U21 international of Nigerian descent Bosun Lawal is in the frame to be named in Glasgow Celtic's matchday squad when they take on Motherwell in a Scottish Premiership clash at Celtic Park on Saturday afternoon.

According to the training images published by Celtic on their official website., Lawal was promoted to first team training by manager Ange Postecoglou on Friday morning - the club's final workout before the game week nine fixture.

The 19-year-old was also spotted working out with the first team stars at  Lennoxtown on Thursday, September 29.

Premiership champions Celtic are facing a defensive injury crisis before the visit of Motherwell, with Cameron Carter-Vickers and Carl Starfelt ruled out of today's fixture due to  injuries.

With the absence of the duo, German-born Nigerian youngster Moritz Jenz has moved up the pecking order of central defenders and it is all but confirmed that he will be named in the starting lineup against Motherwell.

Lawal has yet to make his senior debut for Celtic since his celebrated move from Watford in the summer of 2021.