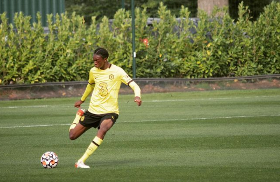 With a statement on their official website, Premier League giants Chelsea have confirmed that versatile defender Kaiden Wilson has signed a new deal with the club.

Without disclosing the length of the deal, The Blues announced that Wilson has signed his first professional contract at the club having turned 17 last month.

He has been described by Chelsea's official website as 'a very quick and aggressive one-v-one defender capable of playing a number of roles across the backline, which include the centre-back and full-back positions'.

The 17-year-old joined Chelsea at U14 level after he was identified by their national scouting team in south-west England and was signed from grassroots football in Bristol at a local tournament.

He started the season on scholarship terms and appeared in four matches for the U18s in his final season as a schoolboy, including two games in the U18 Premier League.

This season, Wilson will be aiming to make his debuts for Chelsea in the Premier League 2, UEFA Youth League and FA Youth Cup.

The versatile defender has been registered on Chelsea's Premier League roster as an U21 player (contract and scholars).