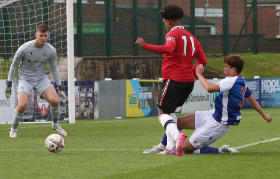 Manchester United U18 and development squads returned to action on Saturday following the conclusion of the international break.

Three goals in the space of eight minutes put the match beyond Manchester United's reach and they managed to grab a consolation through Shoretire in the 36th minute - his first of the season for the youth teams.

The England U19 international of Nigerian descent pulled one back from close range before Vale and Harlock got on the scoresheet to make it 5-1 at the end of the first half.,

Maximillian Oyedele opened his account for the season with three minutes remaining, finishing calmly from the inside the box.

The Poland U19 international, who is also eligible to represent Nigeria and England at international level, slotted in as one of the two holding midfielders in a 4-2-3-1 formation.