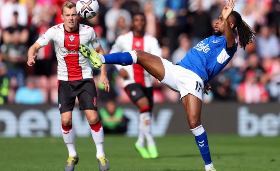 An in-form Everton side came from behind to earn a 2-1 win over Southampton in a Premier League game at the St Mary's Stadium on Saturday afternoon.

Frank Lampard's team are now unbeaten in seven consecutive games in all competitions since losing 2-1 to Aston Villa in their first away game of the 2022-2023 season.

As for team news, Alex Iwobi was joined in midfield by summer signings Idrissa Gana Gueye and Amadou Onana, while Joe Aribo started for the Saints.

After a goalless first half, the game burst to life with three goals in the space of five minutes in the second half.

In the 49th minute, Aribo was celebrating his second goal in Southampton's colours after drilling an effort into the bottom corner from inside the box.

The Toffees hit back almost immediately as Coady slammed the ball home from close range after Gray's freekick was headed across goal in the 51st minute.

Dwight McNeil put Everton ahead with a near post finish from an acute angle after being found from a ball by Iwobi in the 53rd minute.

Stuart Armstrong was booked for a foul on Iwobi in the 86th minute, the Everton number 17 was able to complete the game after receiving treatment on the pitch.

The Super Eagles star made a brilliant tackle in added time, preventing Walker-Peters from getting a cross in.