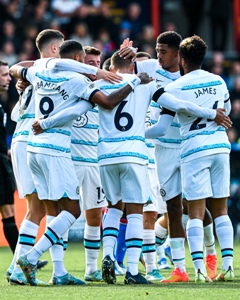 Two former Super Eagles invitees in the shape of Eberechi Eze and Michael Olise started for Crystal Palace in their 2-1 loss to Chelsea at Selhurst Park on Saturday afternoon.

Newly-capped England U20 international Malcolm Ebiwoei was an unused substitute against his former employers, while Chelsea's new boy Carney Chukwuemeka missed out due to illness.

In the London derby, Patrick Vieira's men raced into an early lead in the seventh minute through Odsonne Edouard.

Ghanaian star Jordan Ayew whipped in a curling cross from the right, which was met by Edouard who sent the ball into the top corner.

In the 25th minute, Eze was close to doubling the lead for the Eagles but his effort went wide.

Thiago Silva combined well with the former Arsenal skipper to get his first Chelsea goal and the equalizer.

Despite having a larger chunk of the ball, the Blues were unable to get in front at halftime.

The second half resumed with the Blues piling up pressure. Potter's men controlled the game but were let down their play in the final third.

Their blushes were however spared by former Crystal Palace midfielder Conor Gallagher in the dying minutes of the game.

The England international sent a curling ball into the top corner from long range to score his first Chelsea goal and also seal Chelsea's fourth win of the season.

In the provisional standings, Chelsea are in fifth position with thirteen points from seven games while the Eagles are in sixteenth position.