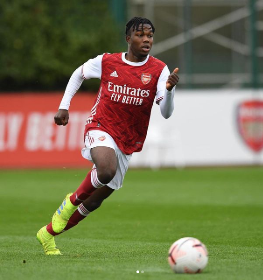 Dutch-Nigerian winger Joel Ideho made it three goals in two matches as Arsenal and Liverpool shared the spoils with a 1-1 draw in a Premier League 2 clash at Kirkby Academy on Saturday afternoon.

Ideho bagged a brace in the Gunners' last outing before their trip to Merseyside, a 3-1 win over Burnley in the Premier League Cup.

He started alongside two other players of Nigerian descent in Zach Awe and Nathan Butler-Oyedeji while Oludare Olufunwa was not in the Reds' matchday squad.

Three minutes to the end of the first half, Ideho poked in to give the Gunners the lead after Liverpool failed to clear a corner.

Butler-Oyedeji had a chance to double Arsenal's lead but was denied by the Liverpool goalkeeper in the 62nd minute.

In the 71st minute, Liverpool equalised through Harvey Blair, who fired into the bottom corner after good work from Layton Stewart.

Eleven minutes to the end of the game, Liverpool could have won it but Luke Chambers' penalty was saved by Hubert Graczyk.

Arsenal remain unbeaten in this season's Premier League 2 and are second in the table with fifteen points from seven games before their next match in the division against north London neighbors Tottenham Hotspur.