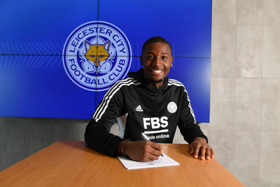 Through their official website, Leicester City have announced that Chituru Odunze has extended his contract with the club.

Born in Raleigh, North Carolina, the goalkeeper is eligible to play international football for four countries namely United, States, England, Canada and Nigeria but he's provisionally cap-tied to his country of birth.

Odunze who joined the Foxes from Vancouver Whitecaps has been a mainstay in the developmental squad of Leicester City this season, making seven Premier League 2 appearances.

The 19-year-old alongside ten other academy players have agreed new contracts with Leicester City.

Odunze has been previously called upon by Brendan Rodgers to join the training sessions of the first team.

During the last campaign, Odunze was named on the bench in three UEFA Europa Conference League games.

The America youth international will be looking forward to making a step up to the senior team, emulating the likes of Harvey Barnes, Hamza Choudhury, Luke Thomas and Kiernan Dewsbury-Hall.

The former Vancouver Whitecaps youngster was a schoolboy at Chelsea before moving to Canada at the age of eleven.