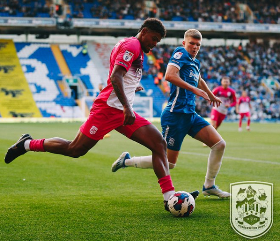 Huddersfield Town faced Reading in the Championship on Saturday and there was no place in the matchday squad for Chelsea loanee Faustino Anjorin.

Danny Schofield was relieved of his duties as Huddersfield Town manager following their 2-1 defeat at home to Wigan Athletic in their penultimate game before the international break.

Scottish football tactician Mark Fotheringham was appointed head coach of The Terriers on September 28, signing a three-year deal until June 30, 2025.

Fotheringham could not call upon the services of Anjorin for the trip to Reading because the attacking midfielder was recovering from an undisclosed illness.

Without the England youth international of Nigerian descent in the squad, Huddersfield Town suffered a 3-1 defeat at the hands of the Royals at the Select Car Leasing Stadium.

Huddersfield Town have not put a timeframe on Anjorin's return to training ahead of Tuesday's trip to Luton Town.

Former Nigeria youth team invitee David Kasumu was in action for the entire duration of the game against Reading.