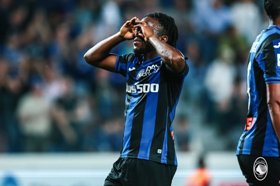 Super Eagles star Ademola Lookman was delighted to get on the scoresheet for Atalanta as they claimed a 1-0 victory over Fiorentina at the Gewiss Stadium on matchday eight of the 2022-2023 Serie A season on Sunday.

In the 59th minute, Lookman combined with his new strike partner Luis Muriel to score what proved to be the game winner, tapping in a pull back from the Colombia national teamer.

The Charlton Athletic product joined Atalanta in August for a fee of nine million euros, ending his three-year association with RB Leipzig, and he has been enjoying a new lease of life since landing in Italy with a goal involvement of five in eight appearances.

Atalanta have the Serie A's best defence, making it five cleansheets against Fiorentina and Lookman was pleased with their defensive display.

Speaking to Atalanta's YouTube channel post-match, Lookman said : "Definitely I'm happy. I was a bit disappointed obviously with the goal being taken away from me last time but nevertheless we won three points today and that's the most important, so happy.

"Defensively we were very good today like we showed in Rome. Last game as well and I think we showed that again today. The moments we need to show quality we did.

"It's good for us keeping our momentum going and keep on doing the work that we are doing every single week in training and look forward to the next game."

Atalanta are joint-top of the Serie A table with twenty points accumulated after eight games,same number of points as Victor Osimhen's Napoli.