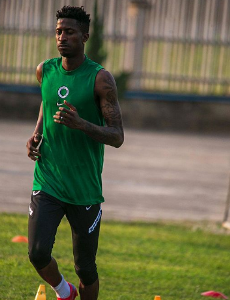 Peter Olayinka's first goal of the season in the Czech First League was scored on Sunday evening as Slavia Prague demolished Slovan Liberec 3-0 at the Fortuna Arena (Praha).

It's not for lack of trying but the Super Eagles forward had been unfortunate in front of goal in the Czech top-flight before Slovan Liberec came to town.

Olayinka ended a goal drought lasting 259 minutes spread across five matches when he converted a cross from Ševčík to double Slavia Prague's advantage midway through the first half.

After 4 strikes in the @europacnfleague Peter Olayinka scores his first goal of the 2022/23 league season! 🎉 #slalib pic.twitter.com/Rr8YfDYPIM

The number 9 has been firing on all cylinders in European competitions this season, with two goals and one assist in the qualifying rounds of the UEFA Europa Conference League  - a feat he has repeated in just two games in the group stage of the UECL.

With his strike versus KF Ballkani on September 15, he etched his name into the history books as Slavia Prague's top scorer in European games with thirteen goals.

Olayinka used the international break to work on his fitness after he was substituted at halftime against FC Viktoria Plzen due to injury.

Slavia's other scorers in their big home win against Slovan Liberec were Swedish center back Aiham Ousou and veteran striker Stanislav Tecl.