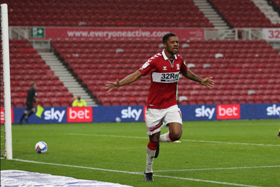 Super Eagles hopeful Chuba Akpom is set to play under a new coach at Championship outfit Middlesbrough and this is official.

Through their official website,  Middlesbrough announced on Monday morning that they have terminated the contract of manager Chris Wilder with immediate effect.

Wilder has been fired by Boro following a poor run of results, coinciding with the absence of Akpom from the squad due to a knee injury.

The former Super Eagles invitee missed seven straight games played by Middlesbrough in the Championship before making his comeback off the bench in Saturday's 1-0 loss at Coventry City.

After eleven matches in the second tier, only Coventry City and Huddersfield Town have fewer points than Boro, meaning right now they are in the relegation places with around a quarter of the season gone.

Akpom played five matches in all competitions with Wilder in the dugout, scoring two goals in 271 minutes of action.