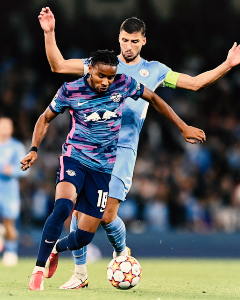 According to David Onstein of The Athletic (subscription required), the Blues have activated the full release clause of £53m to ensure they move faster than their rivals.

In a similar report, Fabrizio Romano who quoted Bild (a German news outlet) said that the French international of Congolese descent had a secret medical with Chelsea in Frankfurt last month.

Christopher Nkunku had a medical with Chelsea, confirmed as called by @BILD. 🚨🔵 #CFC

Chelsea sent long term contract bid to Nkunku to prepare the deal for 2023.

It’s not done yet, as Chelsea & RB Leipzig will speak about fee: €60m release clause, or different deal structure. pic.twitter.com/645YGNjsCc

The 24-year-old is expected to join Graham Potter's men in the summer of 2023, putting an end to his spell with RB Leipzig.

The PSG Academy graduate had a stellar campaign last term, having 55 goals contributions (35 goals and 20 assists) in 52 appearances across all competitions.

In this ongoing campaign he has continued where he left off, scoring eight goals and assisting one in 12 games.