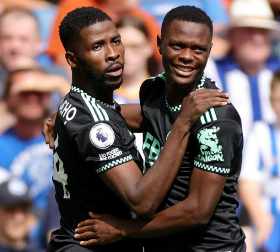 Leicester City will welcome fellow Premier League strugglers Nottingham Forest to the King Power Stadium on Monday night as both teams strive to climb off the foot of the table reports All Nigeria Soccer.

Leicester are bottom of the log with just one draw and six defeats while Nottingham Forest are a place above them in 19th place having had a win, one draw and five defeats.

Wilfred Ndidi injured his hamstring while on international duty just before the friendly against Algeria and so returned early to his club but has reportedly been passed fit to start tonight.

Kelechi Iheanacho will be hoping to start from kick off after starting just one of his six Premier League appearances this season for Leicester. He has played a total of 171 minutes of football in that time with one goal to his credit.

The Nigerian's chances of starting in the East Midlands Derby is actually enhanced with the injury to Zambia international Patson Daka whilst on national team duties.

Taiwo Awoniyi has started three games for Nottingham Forest this season in the Premier League and came off the bench on four occasions but will be hoping to get more minutes to his name after clocking 300 minutes of league action thus far this season.

Forest will hope to call upon Emmanuel Dennis as his availability is 50/50 due to his comeback from an injury setback albeit he has trained in the past few days with the rest of the players.

Last season, Dennis played 33 league games for former club Watford where he scored 10 goals and provided six assists but this season he has played four times, all appearances coming from the substitute bench with no goal on the chart.

Leicester's season have been a far cry from the promise the team has shown over the past few seasons.

The Foxes' astonishing Premier League title win in the 2015/2016 campaign shocked every football fan but the team could be battling relegation unless they navigate through their winnable matches in the month of October starting with the Monday night football at the King Power.

Brendan Rodgers' side have scored ten times times this season in the league but has conceded 22 goals.

Home advantage may count for something for Leicester though especially as Forest have more injury doubts than their hosts tonight.

The match kicks off at 8pm Nigerian time.