...the complete Nigerian football portal
Subscribe
'Bassey has been a big loss' - Pundit reveals Rangers have been inconsistent in defence
Published: October 03, 2022 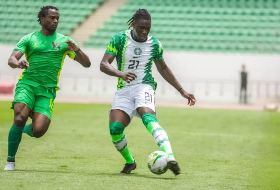 BBC Scotland pundit Tom English has highlighted that Glasgow Rangers have been incosistent in defence this season after the sale of Calvin Bassey to Ajax Amsterdam.

The Nigeria national teamer switched to the Dutch Eredivisie champions in July 2022, with Rangers pocketing a guaranteed fee of 23 million euros which could rise to 26.5 million euros with variables included  - the largest transfer in their history.

Bassey offers versatility as he is capable of playing as a left-sided central defender, left-back and left-wingback.

Heading into their fixture at Anfield, Rangers have leaked in goals in the Champions League with seven conceded and the defensive errors cost them defeats to Ajax Amsterdam and Napoli

And in the Scottish Premiership, they were thrashed 4-0 by bitter rivals Celtic exactly a month ago.

On the positive side, the Light Blues have kept seven clean sheets from fifteen appearances in all competitions so far this season.

Assessing the Rangers side before Tuesday's Champions League meeting with Liverpool, Tom English wrote in his column for the BBC : "Rangers' defence has flitted between composed and calamitous this season. Bassey has been a big loss.

"The injuries to John Souttar and Filip Helander have damaged them, too. "

Bassey made 65 appearances in all competitions for Rangers, helping them win their 55th league title and the Scottish Cup as well as playing a key role in the club reaching the final of last season's Europa League.