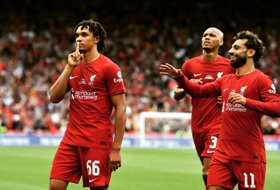 Alexander-Arnold was in the Liverpool team held to a 3-3 draw by early season surprise package Brighton & Hove at Anfield on Saturday, while Walker started but went off injured in the first half of Manchester City's 6-3 rout of Manchester United in Sunday's derby.

The 23-year-old Alexander-Arnold is regarded as one of the best attacking fullbacks in the world but has been criticized for his defensive contribution to the Liverpool team.

Ikpeba underlined that Walker is a better all-round defender than his England teammate.

Speaking on SuperSport's Monday Night Football monitored by allnigeriasoccer.com, Ikpeba stated : "If I have to compare Trent Alexander-Arnold with Walker, I'll go for Walker.

"He (Alexander-Arnold) is not world-class. He's not yet a finished article. "

Since the start of the 2018-2019 season, only Manchester City midfielder Kevin De Bruyne (366) has created more chances than Trent Alexander-Arnold (315).