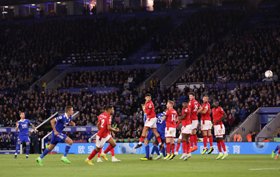 Super Eagles star, Wilfred Ndidi was in action for Leicester City in their 4-0 win over Nottingham Forest, while Kelechi Iheanacho was an unused substitute.

On the other hand, Taiwo Awoniyi and Emmanuel Dennis were unable to inspire Forest to a win or a draw against the Foxes.

In what was tagged as a battle of the strugglers, Leicester City triumphed over Nottingham Forest at the Premier League matchday nine encounter held at the King Power Stadium on Monday night.

In the 22nd minute, Awoniyi had an opportunity to put the visitors in front but he was unlucky.

Gibbs-White played Awoniyi through on goal but his shot hit the woodwork.

Maddison controlled the ball on the edge of the area, and then fired in a 20-yard shot that deflected off McKenna.

Ten minutes before halftime, Maddison converted a free kick from 22 yards out to score the third of the night.

The first half ended 3-0 in favor of Brendan Rodgers' men.

The second half resumed with Ndidi making way for Boubakary Soumare.

Ndidi was excused from the Super Eagles camp ahead of Nigeria's encounter with Algeria due to a knock he suffered while playing for Leicester City.

Seven minutes after the restart, Awoniyi beat the offside trap and then latched onto McKenna's through ball but Ward made a save.

In the 62nd minute, Emmanuel Dennis was brought on as a replacement for Taiwo Awoniyi.

Three minutes after coming on, Gibbs-White played in Dennis but he shot wide before the offside flag was raised.

Maddison turned creator this time, sending a low ball towards Patson Daka who sent the ball home for a fourth.

The win takes Leicester City into 19th place, level on points with Nottingham Forest who have four points.