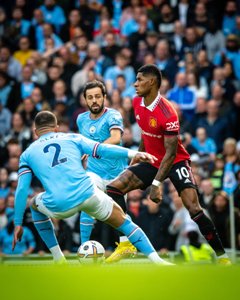 Former African Footballer of The Year award winner Victor Ikpeba has decried the decision of Manchester United manager Erik ten Hag not to start Brazilian midfielder Casemiro in the Manchester derby on Sunday.

Manchester City were rampant and defeated their city rivals 6-3 at the Etihad Stadium.

Ikpeba who was crowned Africa's best player by the Confederation of Africa Football in 1997 expressed his thoughts on Nigeria's version of Monday Night Football on Supersport as the crew analysed the weekend's games in the English Premier League.

"It's about the manager having the upper hand against an opposition manager. Pep (Guardiola) was smart," the 'Prince of Monaco' began.

"He (Guardiola) dropped Aymeric Laporte, there was no Ruben Dias and Rodri (through injuries). He wanted younger and quicker players. He started with (Nathan) Ake and (Manuel) Akanji.

"For me personally, I don't know why Erik ten Hag is not playing Casemiro. You cannot have that quality with what he has achieved and not put him in the middle of the park, in front of the Manchester United defence," Ikpeba stated.

Speaking further on the Dutch coach's decision, Ikpeba enumerated the qualities that stands the former Real Madrid star out.

"Even though we think that they (United) might lose eventually but you you have someone that can hold the ball, that has a lot of intelligence in his play, very good defensively and can go upfront and score goals. Casemiro has a lot of creativity in his game.

"Why not play him together with Scott McTominay and Eriksen? I don't know why he had to start Eriksen instead of Casemiro.

These players  (in reference to the City's creative players) are so good playing together in the middle of the pack and you will struggle.

"I think Ten Hag made a mistake. I still don't understand why Casemiro hasn't started a game for United" Ikpeba concluded.