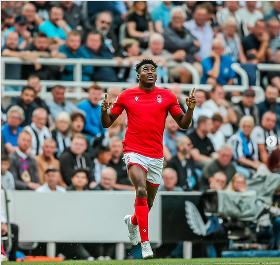 Forest visited the King Power Stadium one place above Leicester who were bottom of the table and without a win in their matches so far in the topflight but the teams swapped places after 90 minutes.

Awoniyi brushed aside his marker to hit a low shot in the 22nd minute but it came off the foot of the woodwork.

Speaking on Premier League Productions, Owen noted at halftime : "It just shows that maybe in the Championship you can get away with some things and still win a game but these are massive moments in the Premier League.

"You can't afford to miss the opportunity. He (Awoniyi) didn't do a lot wrong. I thought the goalkeeper did particularly well.

"He stood up and made himself big and got his angles right. He didn't commit and make a mistake.

Speaking further on Awoniyi's near chance to score his third league goal for Forest, Owen said the following: :

"A lot of time when you're running through on goal like this, you want the keeper to make up his mind for you, dive at your feet or get his angles wrong but he didn't.

"He stood up and he (Awoniyi) gave him a problem, he couldn't finish it," Owen noted.

Nottingham Forest have now lost each of their five matches in the Premier League. Steve Cooper's team host Aston Villa at the City Ground next Monday.