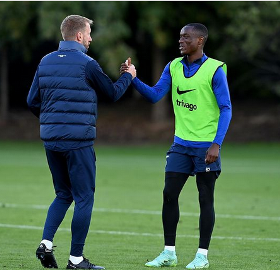 Chelsea's Nigerian right-back Derrick Abu says he has been working hard to improve his game as a whole.

Chelsea head coach Graham Potter promoted the German-born defender to first team training during the international break - a testament to how highly he's rated by the coaching staff at Stamford Bridge.

Abu missed the early parts of the season but has now gone the distance in the last two matches contested by Chelsea in the Premier League 2 against Crystal Palace and Leicester City, which puts him in contention to be involved in some capacity against Oxford United.

Speaking to the official website of Chelsea, Abu said : "This season has started off very well for me from a personal point of view as I have been working hard to get myself into the team and the two games I have started recently show my hard work is paying off.

"I am always trying to get my body in the right shape as well as being prepared mentally as there are a lot of games to be played this season.

"I want to play as many games as possible as that is the only way I can get better. The more games I play the more I can work on different areas of my game."

An attacking fullback, Abu joined Chelsea as an U11 and signed his first professional contract in February 2021.